I have often been castigated in Yellowstone for dashing from the car and forgetting to close a window or lock the doors in my excitement to get the shot of the century. Cindy is fiercely protective of her photographic kit, and any damage, drenching, theft or such as a consequence of my negligence would be a hanging offence – a long painful one. The dressing down for leaving a door open is unpleasant enough. Luckily, there is no opportunity for such recidivism in Kruger National Park, you are not allowed to get out of your car.

The trip had an inauspicious start. I have to confess that the leisurely en route shopping for provisions and the missing of the turning for the Numbi Gate were entirely my fault. But I cannot be held responsible for arriving at the Phabeni Gate and being turned away 45 minutes before stated gate closure at 6pm because “we don’t let anyone in after 5pm” – not advertised anywhere. What was to have been a comfortable drive to Skukuza Camp now became a mad dash to Kruger Gate and thence to Camp before it closed at 6pm. The fine for late arrival is 500 to 1500 Rand, accompanied by severe displeasure. We arrived ten minutes late to a locked gate. A grumpy gate-keeper was not quite grumpy enough to fine us, but he did subject us to his displeasure and a lecture about the dire consequences of future offending. Had he known the speeds we had been travelling at to be only ten minutes late, he might have been rather less lenient.

The first brai and bottle of wine were heavenly. The reason for the Skukuza stop and a leisurely start the following morning was to re-organize equipment, clothes, provisions and boxes so that all attention could then be given to capturing the pixels without the encumbrance of unnecessary clutter. At mid-morning, the sun already high in the sky, we set out eagerly with camera equipment in the back seat and high hopes. It soon became clear that the main encumbrance was each other.

Trying to get two 500mm lenses through the same window to capture a creature on that side of the car proved less than conducive to photographic harmony. We had seen a large sign on the back of a vehicle stating ‘Bird Spotting – Please Pass’, intended to stop the incessant stopping of cars to ask him what he was seeing. We thought of producing our own sign: ‘Arguing – Please Pass’. However, by the end of the day Miss Cindy occupied the entire back seat and I the two front seats, equipment handily to our sides. Harmony and goodwill restored.

Or so we thought. Cindy could easily shoot on whichever side an animal presented, but when on the near side, I had to lean all the way across the passenger seat and attempt to balance and hold steady a large camera and lens combo. Got some nice abstracts though. It took us almost a day to realize that all I had to do was turn the car around. Duhh! Harmony and goodwill truly restored. 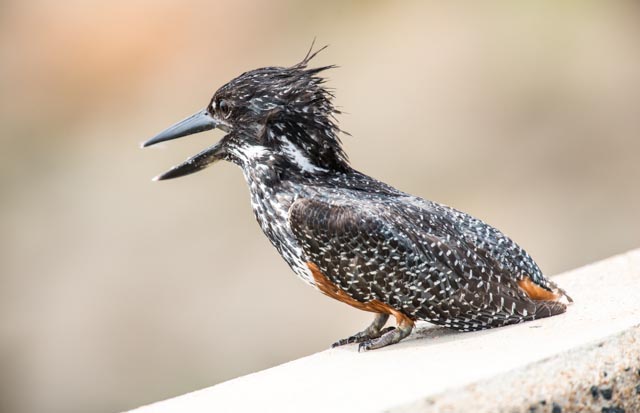 After a couple of days settling into a routine, unfortunately many of them starting before 4am, we had some great pictures and, although we had spotted only four of the ‘Big Five’, we remained hopeful. Highlights were the organized game drives at sunset and the dawn walks in the bush accompanied by two armed guides. There is something truly magical about creeping up at sunrise on a White Rhino mother and calf dozing in the grass and photographing them at 50 yards. There are many other highlights, but one of the pleasures of days spent confined to a vehicle is finding one of the few places where you can got out and walk around – at your own risk of course – usually overlooking a dam or a vista. 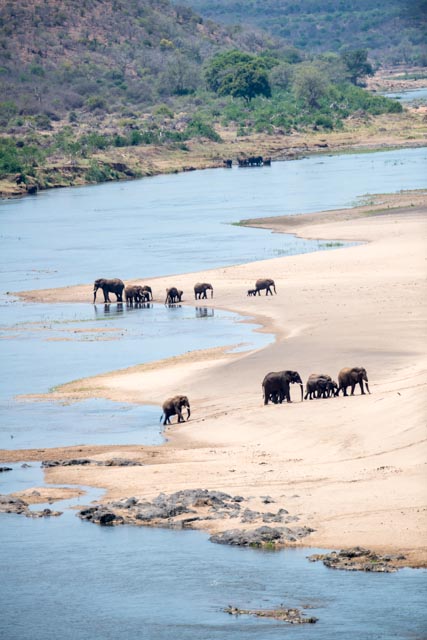 And so to the kind German tourist, who politely approached me and quietly uttered those disturbing few words.

My first thought was baboons, and my heart sank as I turned to find both back windows, one back door and the tailgate all fully open 30 feet away. Delicacy precludes my naming the culprit, but no tongue-lashing for me that day. There wasn’t a monkey in the car, there were two. Squeals of delight from Miss Cindy – “Oh look, it has a baby, I want a photograph”. Yes, a Vervet mother with under-slung newborn is agilely bounding around the insides of the car, the luggage and the food boxes searching for lunch. Having run to the door and attempted to get them out without getting bitten I rapidly find that wherever I am they are on the other side of the vehicle casing the joint. Rapid and dextrous fingers neatly pick up a pack of wet wipes, she smells them and drops them on the seat; my mint tin is smelt, fails to open and is put back where it was with disdain; boxes are pulled at; all whilst she keeps a wary eye on my total failure to corner her.

I look for assistance from my fellow photographer, but she is frantically getting the settings right on her camera. Not quite sure why I calmly ask “What are you doing?”, because it is clear that the desire to photograph the baby remains the prime objective, but a few further choice words and we have all the doors closed and I manage to scare the intruders out of the tailgate opening. Panic over, and a highly amused circle of onlookers disperses. Vervet mother walks sedately away. 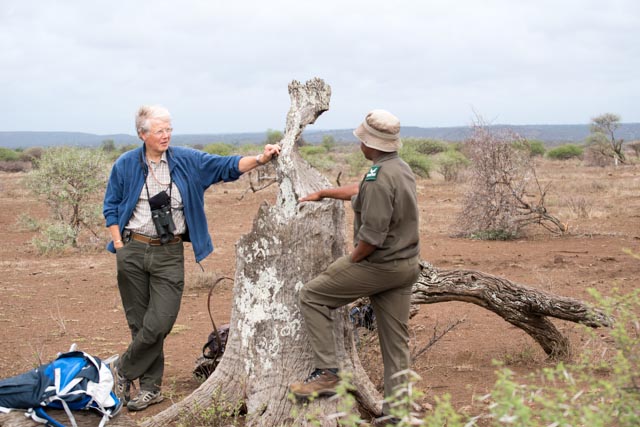 The life of a Kruger driver, guide, spotter, bag carrier, brai lighter and general photographer’s factotum continues for the week, a week of anticipation and excitement providing sightings of too many animals and birds to record. Lots of animal behaviour, and thrills too – trapped without danger by a feeding-focused herd of Elephants, things changed when an enormous mother charged, trumpeting with ears wide, as a stupid tourist got between her and her baby, the culprit and wife were a little shaken to say the least; another large herd of elephants with several newborns crossing the Olifants River and wallowing in the shallows, Elephant behaviour and social life are fascinating to watch; two Lion kills, one with attempted interference by a jackal and the other by a hyena; stalking on foot Rhino, Hyena, Zebra, Giraffe, Buffalo in the dawn light; a hornbill carefully sealing its mate into its hole with mud taken very carefully from a favourite spot; a pair of Lilac-breasted Rollers inspecting a hole in a tree, both eventually disappearing into it, but one having huge difficulty getting out as its body stuck in the opening – it did eventually pop out like a cork from a champagne bottle; and much, much, more.

We eventually bagged the Big Five with a brief sighting of a Leopard climbing down the side of a tree. The one missed species which it would have been good to have seen was a Cheetah, but this was compensated for by an early morning stumbling upon 3 of the only 120 Wild Dogs left in Kruger. We also bagged 5 of the 6 ‘Big Birds’ and almost all of the eagles and vultures. Apart from the occasional admonition for driving too quickly, especially when passing water-courses, to allow Miss Cindy to scan the area; a few vehicle positioning debates; and odd grumbles about the incorrect light conditions due to me tardiness or speed; harmony was maintained. The rear window notice was not required. 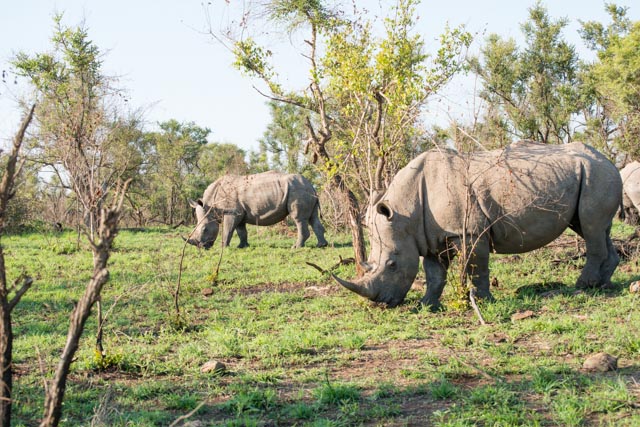 Kruger is an amazing place, and at times it is almost as if you are the only ones there. On one occasion we blocked the gravel road to get the best angle, and spent 40 minutes without having to move. It is not an expensive place to visit, unless of course you stay at one of the many private lodges. The SANPark Camps and accommodation are varied, depending on situation and size, but all have very adequate facilities and self-catering accommodation in a variety of styles, all of which blend appropriately into the environment. All come with en suite showers, towels, soap etc; all have a brai; most have small kitchens and all utensils; and all have daily servicing. There are Rondavels for one up to luxurious Guest Houses for many. All Rondavels are good, but the position of some is worth seeking out, usually those by the perimeter. With the exception of Skukuza, we had perimeter sites on the other four Camps, for example, at Olifants a two-bedded perimeter Rondavel on a high escarpment overlooking the Olifants River, where we sat in the late afternoon watching the Hippos, Elephants, Water Bucks etc etc below us. The size of the camp determines the level of facilities, but all have a shop, most have a restaurant or cafe and many have petrol available. 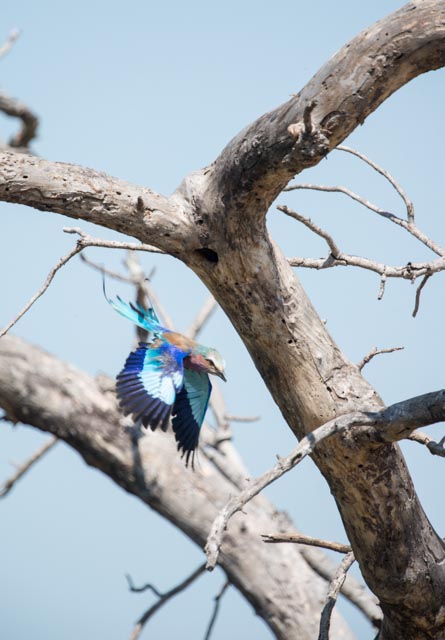 Staff at all levels are helpful and friendly, albeit sometimes unhurried; it is a well-run and efficient organisation which provides an excellent service. Everything, including game drives and walks, can be booked easily online – take a look at www.sanparks.org/parks/kruger and consider putting Kruger on your bucket list. But do book early if you want the best camps and the best positions. 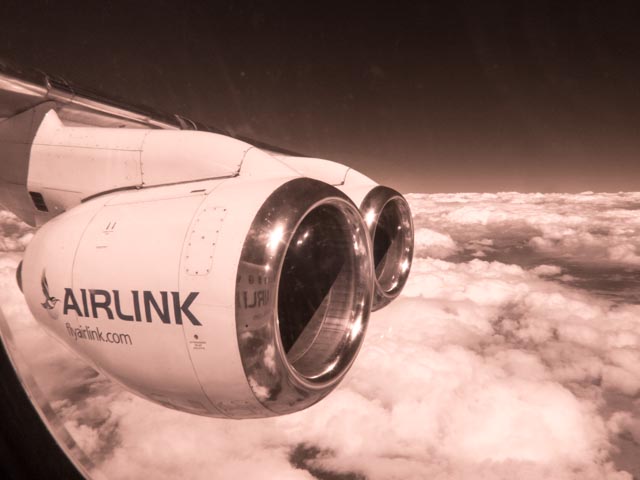