When it blows, I think I would rather be here to see it, albeit briefly. I suspect the anarchy and discomfort of the ensuing ‘nuclear’ winter would all be rather tedious and bothersome. There might even be some good photographs to be had, not that there would be time to get them onto the website for you all, nor perhaps even to review the first one on the back of the camera. I understand that pyroclastic flows are quite speedy, not to mention falling boulders.

However, when, a few millennia after the event, the alien archaeologists are excavating through the volcanic ash layers above the Canyon area, seeking evidence of primitive man, they will be unlikely to find any evidence of where we spent an exceptional 4 days last week. ‘The Yurt Camp’ is constructed almost entirely of wood and canvas and, although there are indeed two yurts, I was mistaken in my belief that we would be living in one. Yurts are for cooking, dining and socializing, little Hobbit Huts are for living in. I had been prepared by my personal guide and tormentor for no washing facilities, temperatures of -40 (which I note is the same in both Centigrade and Fahrenheit), malodorous ‘restrooms’, an eccentric set of hosts, spartan quarters and much else to make me wonder why I was doing this. Good psychology to build something up to such a degree of discomfort that anything would be a pleasant surprise. It certainly was that – a unique and outstanding experience!

~
In Winter, with the exception of the Lamar Valley, all roads in Yellowstone are impassable except by snow-coach or guided snow-mobile convoy, a moronic pastime a bit like seven capital cities in seven days – ten minutes at each ‘site of interest’ and then on, following my leader to the next. The sights are a long way from the home base of these beasts, consequently, anyone wanting to visit the Hayden Valley, and a great deal else in the Park, will not be able to do so much before late morning or after mid-afternoon. 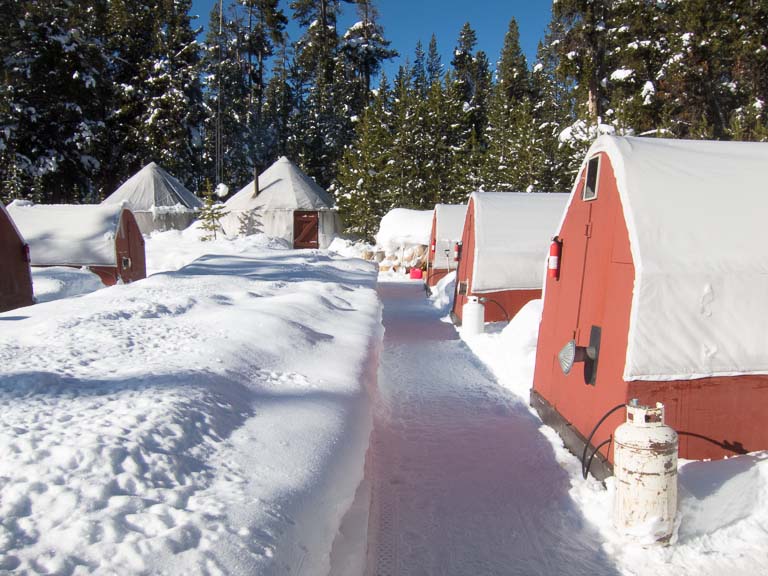 ~
That is, apart from those lucky souls staying at Yellowstone Expeditions' Yurt Camp, who can be watching the spectacularly eerie ghost trees at Mud Volcano at sunrise; or the Lower Falls of the Yellowstone with the strange rainbow lighting effects in the mist as the sun rises above the horizon; or sunset at Alum Creek, capturing the fiery reflections in the streams and the light in the vapour from the thermals as if the whole valley were a blazing inferno. Whether you are a photographer, a snow-shoer, a skier, or all three, you have the place to yourself. Imagine being, as we were, two of only five people to be able to do this, to have a private snow-coach for the three of us who were photographers, and the services of a highly knowledgeable guide and driver to make it all possible! 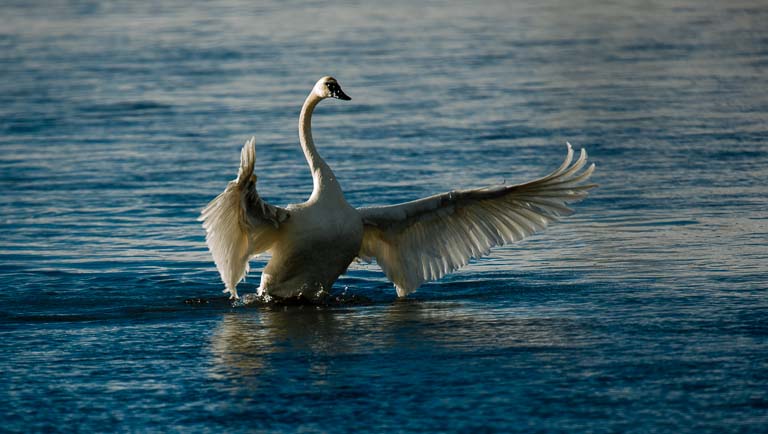 ~
The camp takes a week to set up, is there for ten weeks and then has to be taken down and hidden as if it had never existed. Everything, with the exception of water, has to be brought in from outside the Park on a regular basis – gas, food, batteries, light bulbs, wine, beer, toilet rolls, snow-coach spares, wood for the huge stove, and of course guests. They are also taken out regularly, as is all the rubbish. A dozen or so guests can be accommodated at any one time and most stay for at least three or four days. There is a shower – if you order the hot water in good time, but it is surprising what you can do with the deft use of Wet Wipes. Yes, the restrooms are a little pongy, but that is because they are toasty warm – the alternative being somewhat worse considering the external temperature, although it only got down to -25F during our stay. Have no fear, the Hobbit Huts have thermostatically controlled, propane-fuelled heaters and we had to change our first hut as the lowest we could get it down to was unbearably hot for we hardy types! If that is your bag, try the sauna after a hard day’s skiing. Light is provided to each hut by a battery and a small solar panel by the door, and besides the warmly covered beds – two singles or one double – there is just about enough room to swing a dead cat, not that one would be likely to be available because of the regular visits to the camp of the healthy looking red fox. More interesting was the herd of bison that came to view the morning before we arrived. 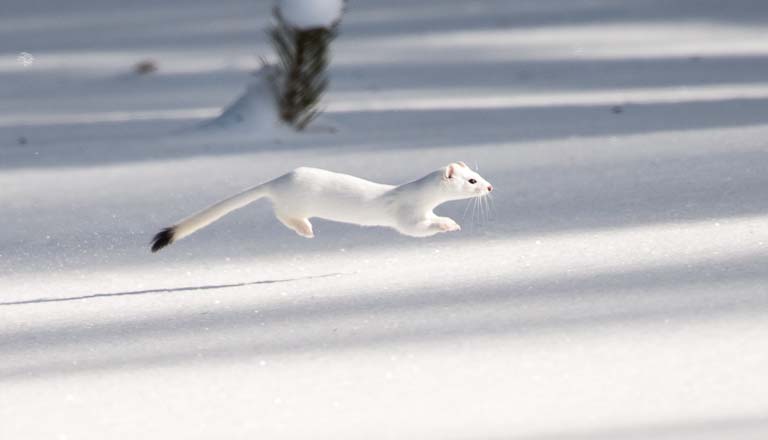 ~
The camp, thirty years old this year, was the brainchild of Arden, a larger-than-life character and polymath, geologist by training, master of many trades, including snow-coach mechanic and track-maker, and highly entertaining raconteur. His team are all passionate outdoors people with a huge knowledge of Yellowstone, its wonders and its wildlife. As the season is so short they all have other jobs, such as Ranger, wolf biologist, geologist and so on. They are also great cooks and provide superb breakfasts, lunches on the hoof and three course dinners, wine and beer included. 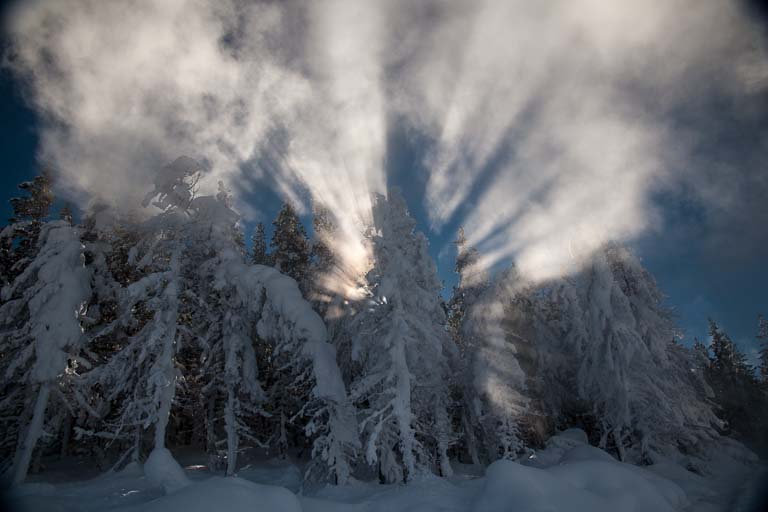 ~
Your day is just that, whatever you wish to do – as long as it is legal – you can. We spent four days from before sunrise until after sunset capturing the amazing sights of Yellowstone; hiking through snow up to our thighs to get the right vantage point; silently staking out his territory to photograph an Ermine; following Trumpeter Swans up the Madison River to catch them in mist, in golden light and in flight; watching from a bridge over the Yellowstone River as a family of Otters played on the ice, in the water and down snow-slides; ………

~
Very memorable experiences! – which you should consider seeking out – I fully intend returning.

~
I will let you know if there are any intimations of subterranean rumblings.
~