Yellowstone - The Sting in the Tale 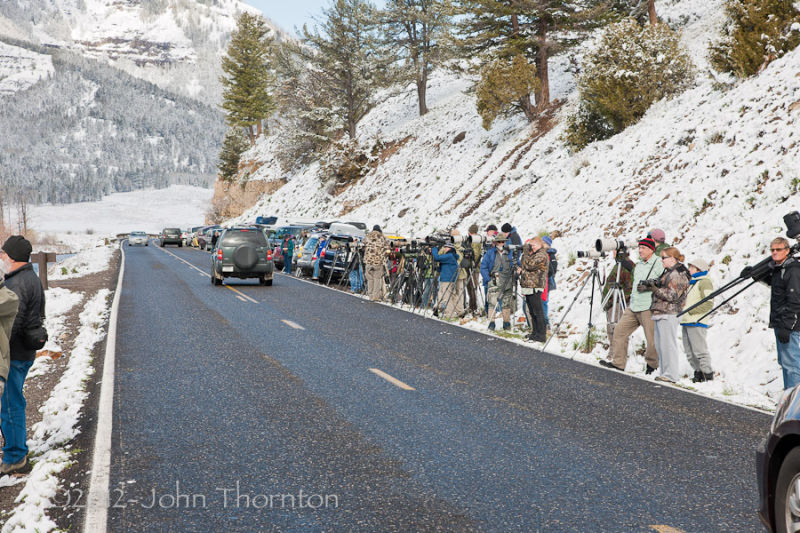 I have previously waxed lyrical about the Greater Yellowstone Ecosystem and the National Park at its heart. I will merely say here that it is a place that must be seen to be appreciated and understood, no amount of reading or watching of videos can do it justice. Go in the Spring or Autumn when the tourist load is lower, and go early in the day – preferably before dawn.

Tourist numbers are down this year because of the weather, but only by about 10%. For all practical purposes the queues, the appalling driving, the impatient drivers, the idiotic behaviour, the mindless selfish tourists, those who think of it as a zoo or a playground … etc are unchanged. I repeat, go early!

I was in the Park at dawn on the 27th of May, taking a slow leisurely drive from Mammoth to Roosevelt and on into the Lamar Valley, getting some nice shots of bison in the dawn light against the background of the six inches of snow that had fallen the previous night. I saw few cars, but several did pass me impatiently with no seeming interest in wildlife viewing. ‘Why’ became obvious when I got to ‘Confluence’, where Soda Butte Creek meets the Lamar River, and where pandemonium reigned. There was an elk carcass with resident grizzly, attendant ravens, watching golden eagle, stalking wolves and skulking coyotes! But more to the point, although only 0730hrs, the assembled ranks of ‘The Big Lens Brigade’ covered a hundred yards of the road and were two deep in places. This is not wildlife photography!

However, said he shamefacedly, there were good images to be had and I stopped. After about ninety minutes I had had enough of the circus, which by now had become absurd. I drove on past Hitching Post, Soda Butte, stopped at the Trout Lake turnout and parked next to a solitary car. Packing my camera, lens, tripod, lunch, water and extra fleecy into my rucksack, and putting on my thick mitts, I headed off through the snow up the steep climb to Trout Lake hoping for a little peace. Gratifyingly, the occupant of the other car was just leaving the lake to head back to his car as I arrived. Apart from reporting a moose at Buck Lake higher up the hill, he had seen nothing.

Trout Lake was once used as a hatchery for the native cutthroat trout by the Park Services, but was abandoned years ago and is now populated by a hybrid ‘cutbow’ cross between cutthroat and rainbow trout. Otters are not fussy about the species of a trout! My purpose in climbing to the lake was not just to escape the madness of Confluence, but also to try and photograph otters, possibly feeding on spawning fish in the shallows where the stream entered at the far end of the lake. There were no otters, but near the stream there were some very clear, fresh, bloody otter tracks in the snow and the remains of a trout tail. In the absence of the hoped for subject, a moose at Buck Lake sounded a good alternative, and anyway the otters might be up there.

No moose, no otters, but a gloriously peaceful lake and only me to enjoy it. I set off back to Trout Lake and, cresting the ridge overlooking the lake, saw a female figure in the distance along the side of the Lake heading towards the junction of my route and her path. The individual was nothing if not colourful: bright blue jacket, non-matching blue tracksuit bottoms, grey running boots, topped with a bright red woollen bobble hat – all somewhat at odds with the beauty of the setting. It got worse. I felt she could not have failed to see me descending in direct line with her route, but clearly not, about 100 yards from me she stopped in the snow, squatted, pulled down …. need I say more?! I ducked behind a tree to protect everyone’s dignity, my new-found peace and tranquillity shattered! Creeping off to the side, I went and took a very deep breath looking down from the heights onto Soda Butte Creek and the Lamar Valley.

Three weeks later I returned to Trout Lake to look for the otters again. No red bobble hat, but the fishing season had opened; astonishingly the Park Service allow fishermen to drag their large inflatable floating rings up to Trout Lake to fish. Despite notices forbidding fishing in certain spots, especially the spawning grounds, abuse is rife. I got there early and yet there were already a couple of floating abominations paddling around the lake, and certainly no otters. So, up to Buck Lake and, after surprising a black bear grubbing around fifty yards away which thankfully galloped off into the distance, I had the thrill of seeing four otters coming from their early morning feed to a spot just opposite me. They played on a fallen tree angled into the lake, and then proceeded to line a gap under the tree with dead grass and crawled in to huddle together to sleep. I watched and photographed for a couple of hours but they were now well into a post-prandial nap.

On descending past Trout Lake there were now a dozen fishermen, and when I climbed back up again three hours later, having photographed two courting grizzlies in the interim, there were at least two dozen. I really do not understand why, with so much fishing available in the Park and the wider area, they allow this unique environment to be despoiled. The otters were still asleep, I had had enough exercise for one day and so headed off to Cooke City outside the North-East Gate of the Park to position for the following day’s assault on the Beartooth Pass.

Cooke City was cold, very cold, it was mid-June and I was wearing a ski jacket. It is a small ‘city’ with a population of 142 in 2007, which has dropped since, and it takes a slow five minute walk to get from one end of Main Street to the other. After a couple of beers in a local bar, I was finding it hard not to think of ‘Deliverance’.

It snowed heavily over night; I got an hour along the Beartooth Highway before being stopped and turned back; I didn’t stop in Cooke City on the return journey.