It's the Weather Again! 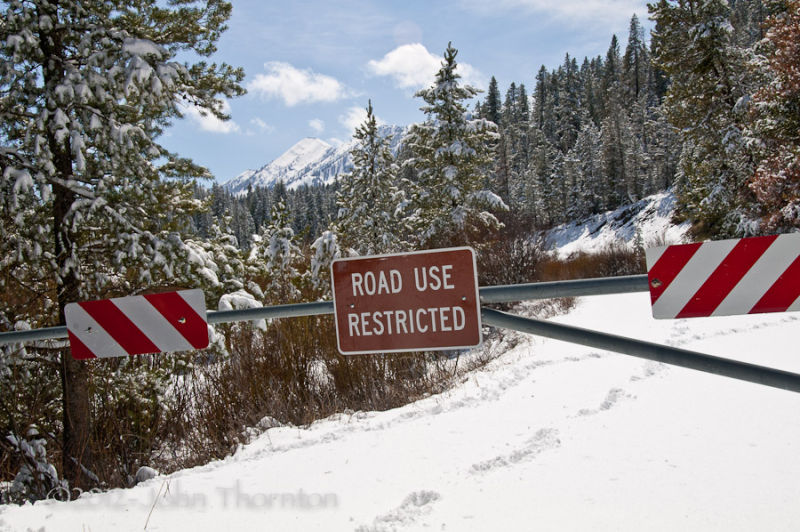 There was no Spring this year. An unrelenting Winter forced it to stumble into the back of a hesitant Summer just before that season was due to start, and everything frantically tried to catch up. By the second week of June there was hope – on one balmy evening, after strolling between the kaleidoscope-coloured timber-clad houses of Lewis and Yellowstone, I crossed the 9th Street Bridge, barely meriting a glance from four white-tailed deer feeding amongst the willows ten feet away, and made my way to the Yellowstone River at the end of the island. It was warm, the air was heavy with the scent of lilac and new-mown grass, and others out for a stroll gave a cheery “Hi, how ya doin, great weather!”, or something similar. The following day there was torrential rain for the open-air Classic Car rally, and the following week my attempt to drive the Beartooth Highway was thwarted by blizzards and drifting snow.

The river was a raging torrent of liquid mud, a consequence of the incessant rain and the beginning of the snow-melt from the much greater than normal pack in the mountains. Much else has been extreme – the low temperatures, the lack of sunshine, the blizzards, the wind, the flooding, even tornadoes in a State that doesn’t have them. Luckily, and perhaps selfishly, it was at least good to be in Livingston where the worst of the flooding was avoided, but only miles down the road hundreds were forced from their homes, houses were wrecked and people died. Even that was small in scale in comparison to what was happening much further South on the Mississippi, which is fed by the big rivers of Montana – the Madison, the Jefferson, the Yellowstone, the Boulder, the Bighorn, the Musselshell and, ultimately, the Missouri into which they all flow. The Army Corps of Engineers, who regulate dams and maintain levees, were forced to juggle and balance water flows with decisions that saved some but ‘drowned’ others