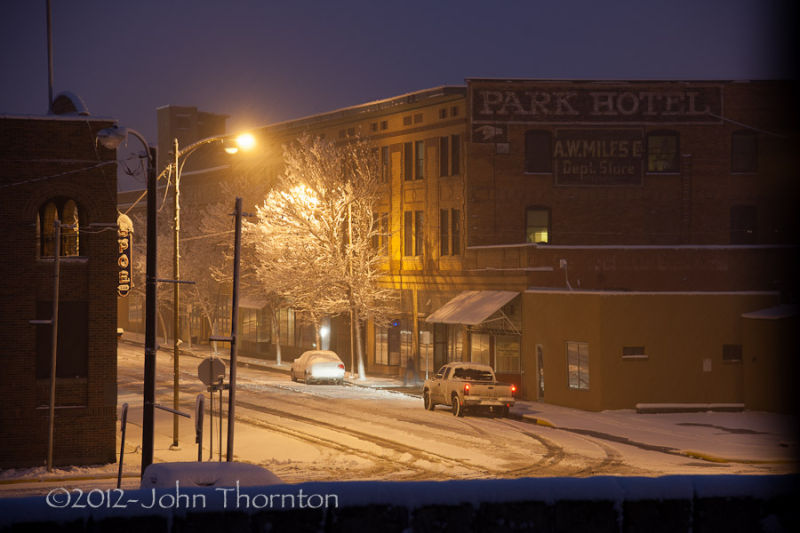 Livingston is a City, a small one – estimated population in 2007 of 7500 – with wide streets, lots of late 19th and early 20th century architecture up to three stories high, pretty wood-clad houses, lilac-scented spring evenings and the Yellowstone River three blocks away from my pad. It sits in a wide valley, surrounded on almost all sides by seasonally snow-clad mountains and is all that I imagined a post-cowboy town where Calamity Jane lived for some time would be. However, following the arrival of the first train in 1883, it rapidly became a major railroad hub midway between the Northern Pacific Railroad’s end-points at Seattle and St Paul; it was the gateway to Yellowstone National Park; boasted the grand ‘Depot’ railway station opened in 1902; but lost passenger services in the late ‘70’s; and in February 1986 the service shops were closed by Burlington Northern Railway. It has subsequently built a tourist infrastructure, with fly fishing and Dan Bailey prominent, and gained a reputation as a centre for authors, actors and artists. A number of films have used locations in the region, many famous actors and writers are said to live locally and wander the streets – but didn’t whilst I was there, either that or I didn’t recognize them – and there are almost as many art galleries as there are bars and restaurants! I did see Arlo Guthrie, but that was on the stage of the beautifully restored Ellen Theatre in Bozeman during a fantastic programme of, mainly his father’s, unrecorded songs and with about twenty of his family, even down to the toddlers attempting to sing along whilst running through the skirts of their mothers and creating mayhem.

A lot of Americans are bemused and even hurt by the World not understanding their good intentions when they are telling it what to do. I have tried to explain, but American culture is a heady brew, in which they are deeply steeped. A lot of the world thinks that Americans are loud, brash, self-satisfied and always in a rush, and I am sure that there are Americans like that, just as there are similar folk in any culture, but I have always found most of them to be courteous, charming and helpful. Certainly that was my first impression of Livingston. People are friendly with a tendency to greet you on the sidewalk with a cheery “Hi, howya doin?”, cars stop on the street where there is no crossing or stoplight to let an inveterate jay-walker cross, and folks have time to talk. On the first evening I went for a walk by the river with my camera, and almost everyone said hello as they passed and several stopped for a chat about photography, the weather or the scenery! I don’t know whether I would like to settle there permanently, but there is a lot to be said for the West and for small-town America, although I am not sure that Livingstonians would like that description.