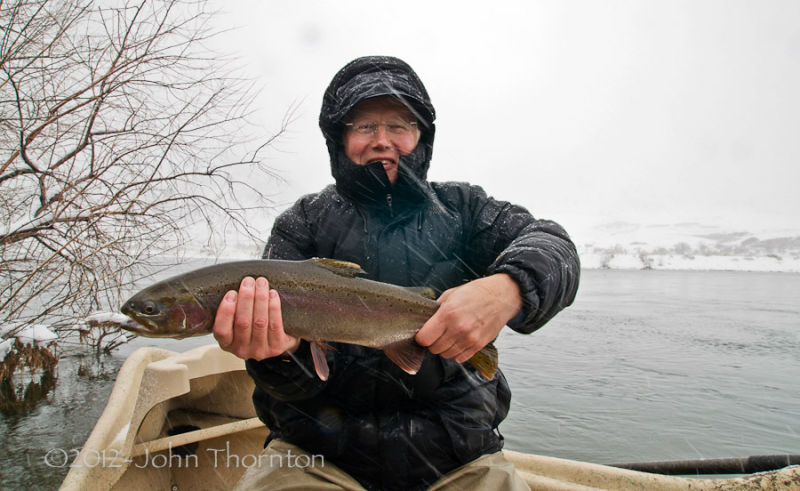 I always bang on about the weather, so let’s get that out of the way at the outset: blizzards; brilliant sunshine; temperatures of 32F to 93F, with 34F to 74F in one day; torrential rain; thunderstorms; gales; beautiful sunsets with balmy evenings sitting on the porch; mists to drown in; much more; and many of these in the same day. If you don’t believe me, I have witnesses.

However, my pièce de résistance météorologique came towards the end of my stay. They don't have Tornadoes in Montana. Well, that is they didn’t until the Sunday that I went to Wilsall’s Rodeo, a little town just in the lee of the Crazy Mountains. In the space of thirty minutes, the day went from glorious sunshine to the blackest of black and torrential rain came from nowhere in an instant, followed by enormous bouncing hailstones. The rodeo went on! Just as the penultimate bull was loosed from the gate with its rider, lightning struck immediately behind the judges’ booth with almost simultaneous thunder! Dramatic or what?! The bull thought so, and deposited his rider next to the pen without further ado.

I walked back to the car in the heaviest of rain, through newly filled lakes where lakes weren't meant to be, and my Goretex jacket might just as well have been cheese-cloth as far as keeping me dry was concerned, the water forcing its way through every breach in the continuity of the material. It took me forty minutes to drive back to Livingston, during which I entered glorious sunshine. During the journey the local radio interrupted its broadcast to warn of sightings of funnel clouds, and within the hour, just up the road in Billings the roof came off a 12000 seat arena and several other commercial buildings were levelled. The only reported injury was someone hit on the head by a hailstone.

A view from a local – Tom describes Livingston as eleven months of winter and four weeks of visitors. Well, I had my four weeks-worth of visitors, but unfortunately some of them picked up quite a bit of winter, and that in May & June.

More of Sax & Fryer later, but I and one of the three white-haired ladies serving behind the ancient counter of that fabulous bookstore – the one who most often furnished me with my daily copy of the ‘Livingston Enterprise’ after it hit the news-stands at 3pm – dropped into a regular dialogue on the weather, past, present and potential. If I was pessimistic there was always agreement, but should I optimistically question the veracity of the forecast as a consequence of the sunny day from which I had entered as opposed to the predicted foul weather, it was always: “Oh, there’s still time!” And there usually was.


My diary entry for the 4th of May:

We had a gale today, albeit in brilliant sunshine, and it is now thundering and lightning. Even the lady in Sax & Fryer commented – with a little too much glee I thought – about the unusually strong wind and the dust it had kicked up. I got out rapidly before she realized I was to blame. Doesn’t matter where I pitch up, the weather always seems to become extreme!