The Other Side of Fiji 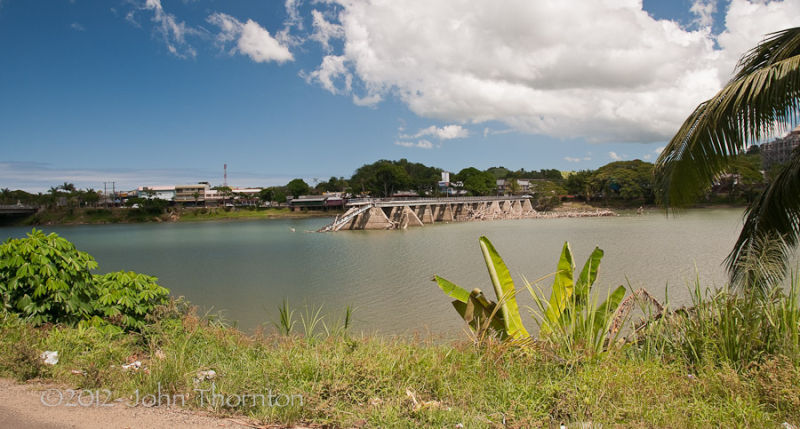 Fiji is an odd place! Portrayed as a paradise in travel brochures, you are not prepared for the racial tensions, the heavily fortified shops in rural areas where you buy goods through a small steel grill and the clear difference in prosperity of the two ethnic groups; nor are you reminded that it is in essence a military dictatorship. The Prime Minister is the Head of the Armed Forces, who in 2006, having demanded that the then Prime Minister resign and restored his man as President, was appointed as PM by the new President. The tensions devolve from the relative powers of ethnic Fijians and Indo-Fijians, the former fearing that they could be politically disenfranchised in their own country, by those who arrived as slaves generations before. It is the Indo-Fijians that are industrious and ambitious, that hold the wealth, if not the land, and who drive the new cars aggressively whilst the native Fijians grub a living from their land and who appear much more impoverished. Notwithstanding this, the latter are the most relaxed and friendly people I have met, obsessed with football and Rugby, and always wanting to stop and chat. It is a relaxed place, almost too much so! Bula!

My hire-car was a wreck and the most expensive of my trip – much is imported and costs are high. Mind you, the state of the roads, a desire to blend in and little time spent driving meant it was an ideal vehicle – how would they prove that I had caused a particular bump, scrape or missing part amongst all the existing or missing ones? Short of wrecking it, it would have been impossible to tell the difference from pick-up to return! Only the two slow leaking tyres were a nuisance because of the paucity of air pumps. Anyway, it was ideal when the locals launched themselves into the road waving their arms frantically to ensure you stopped to give them a lift.

The mother and three children late for church on Sunday were delightful, all done up in their very colourful Sunday best, and on their best behaviour. I dropped them outside the church, from which was emanating the most loud and melodic of singing, all Fijians seem to be musical whether singing or playing the guitar or ukelele. As for the rest of my passengers, I didn’t quite have the family pig in the back, but I did have two sacks of freshly gathered fresh-water mussels, along with large, in both size and number, families crammed into the little yellow wreck. The offer of marriage from the rear seat from one of the mussel pickers came as a bit of a surprise, “So, you are single Mr John, so am I; I am Lily and I am 27” she said with a look of expectancy. Her friend smiled, and Lily pressed her case further by repeating her single status and age; luckily we were just about at their destination and I managed to escape with just hand-shakes, smiles and a resigned “Goodbye Mr John”!

I had intended driving to sights around the island, but it rapidly became clear that the distances involved, the state of the roads, the standard of driving, the risk of forced marriage and the lethargy that descends in the high heat and enormous humidity required a different approach. Idleness!

The cyclone arrived 12hrs after I flew out.