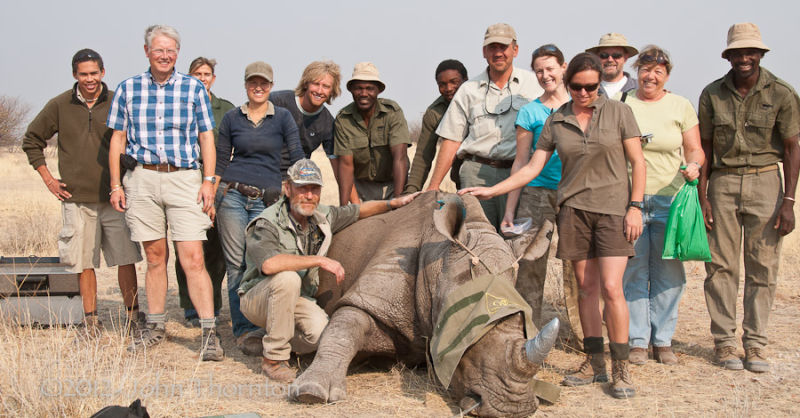 Having left temperatures in Kruger in the upper 20s/lower30s, I retired the next day to an internet café in Fish Hoek to escape the cold, the torrential rain and the gales on the Cape Peninsular. It was the day that a large bulk carrier blew ashore in False Bay! In my inbox was the latest monthly e-newsletter RhiNEWS from Save the Rhino International, a charity that Christina, our guide in Namibia in 2007, had inveigled me into supporting, and in the newsletter was a short piece about the opportunity to join a conservation team tagging rhino in Namibia in exchange for a donation to their conservation and research programme. Wilderness Safaris were throwing in a week’s safari and all internal flights for free. To cut a long story short, the weather was appalling and it’s not every day you get the opportunity to dart rhino from a helicopter!

Five days later, I was sitting in Rob Moffett’s office in Windhoek being briefed on where I would be going. Wilderness Safaris owns and runs a number of concessions in Africa, and is heavily involved in sustainable partnerships with local communities and supports numerous conservation and ecology research projects, hence their involvement in the rhino tagging project at Ongava.

If any of you have any interest in the reality of land-ownership and the socio-economics of the game-viewing industry read ‘How Many Wildebeest do You Need?’ by Mike Norton-Griffiths , it is a little long, but worth reading in total; an eye-opener for those who contribute to wild-life charities! Even heavier, but fascinating, is de Soto’s work on why the absence of legally defined land ownership will always confound Africa’s attempts to prosper.

As for me, it was planned that I would spend two nights in Windhoek, three at Ongava Tented Camp and three at Desert Rhino Camp. The rhino tagging was on the Ongava Reserve.

The preparation, briefings and logistics were as well executed as any military campaign, the team as focused and professional as one would expect of a group of scientists, vets, rangers, conservationists, managers and government employees who are dedicated to fighting one of the most heart-breaking examples of species destruction on the planet at the moment. After flying with Stuart the Reserve Manager and Axel the vet in the chopper to dart the first two white rhino, I joined the ground team for the tagging of the two black rhino to see it from their perspective and to chase across the bush amidst the all-enveloping dust to get the large amount of necessary equipment to where the rhino had gone down.

The white rhino had GPS trackers fitted into their front horns, and all 4 had their ears notched for identification and microchips placed in both horns. The team worked as one with precision and speed to keep the down-time to an absolute minimum, with multiple recordings and samples taken, and immunizations given.

What the bright shiny silver duct-tape-wrapped horns will do for the white rhinos’ sex lives is anyone’s guess!