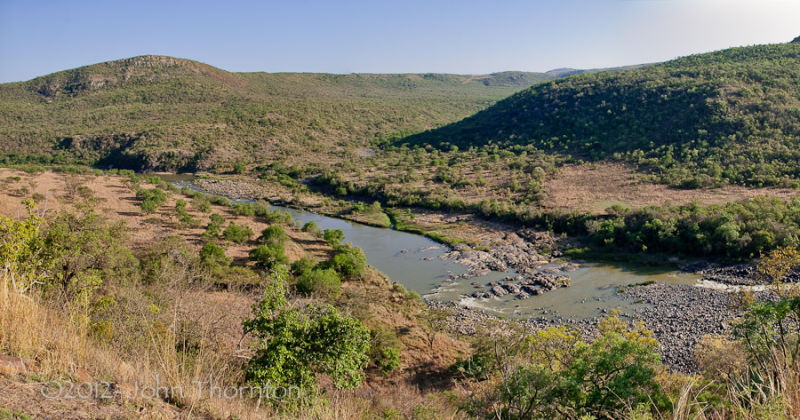 The murder of David Rattray in January 2007 may have deprived the world of one of the most knowledgeable and enthusiastic historians of the Zulu War of 1879, but his influence and presence are still very much felt at Fugitive’s Drift. It was he who, by seeking out the testimony of those who had direct links to Zulu warriors who fought at Isandlwana, came to the view that it was a great Zulu victory, not a British blunder. Those who lead the tours today, ensure that his sentiments and the realities of the battles are separated from the jingoistic views portrayed for many decades in the histories.

The three day’s spent at the Guest House at Fugitives’ Drift – the name of the river crossing where most of the 55 survivors of Isandlwana crossed the Buffalo River – were a moving experience. The first tour was lead by Joseph, a Zulu and ex-biology school teacher who, when he applied for the position at Fugitives’ Drift, fulfilled none of the three essential criteria – good English, able to drive and able to ride a horse. Clearly, David Rattray saw potential, and although he still has nothing to do with horses, Joseph enthralled during the emotional journey on which he took us at Isandlwana. Books can furnish the ‘facts’, but it is only by walking the ground and having someone like Joseph bring it alive that you can truly appreciate what happened that day. I would defy anyone not to have a lump in his throat as the story is unravelled, I did. It was very quiet when Joseph finished and left us to roam the battlefield with our own thoughts.

That evening, we walked to the viewpoint overlooking Fugitives’ Drift and then to the graves of Melvill and Coghill, killed during their flight to save the Colour, which was lost in the Buffalo River but recovered some four months later by Lt Henry Harford, after whom the beautiful new Harford Library overlooking the Buffalo River and Islandlwana is named. The following morning we were led on a walk by a young Zulu from the local community, whose grandfather and great-grandfather had each been in separate horns of the attack at Isandlwana. Perhaps understandably, he had a slightly partisan view of the behaviour of the British based on the oral history handed down in his family, but what a connection!

Finally, on the last afternoon, we walked the ground at Rorke’s Drift with George, the son of a British Army Lieutenant General, whose degree thesis had focused on some of the personalities of the battles we were experiencing. He vividly brought the seemingly hopeless defence of the small outpost to life. Rorke’s Drift is a very different battlefield to Isandlwana, tiny in comparison, and almost claustrophobic when one considers the numbers of Zulus that fought and died there; forget all that you may have gathered from the film ‘Zulu’, a damn good yarn, but a travesty in depicting many of those involved. It is questionable whether it was the great victory it was hailed as, or merited the large number of VCs – the British needed a face-saving diversion – but there is no doubting the bravery of those who fought there. Again, it was a moving experience and, although I do not know how many times George has led such tours, he ended by reciting the inscription on Pte Henry Hook’s Grave at Churcham, not far from Cheltenham: 'If our time is come let us die manfully for our brethren's sake, and not have a cause for reproach against our glory', following which he took several minutes to regain his composure. Again, we were all rather quiet.

The whole atmosphere of Fugitives’ Drift needs to be experienced to be understood, everyone there is infused with the same vision and passion. A magical three days!