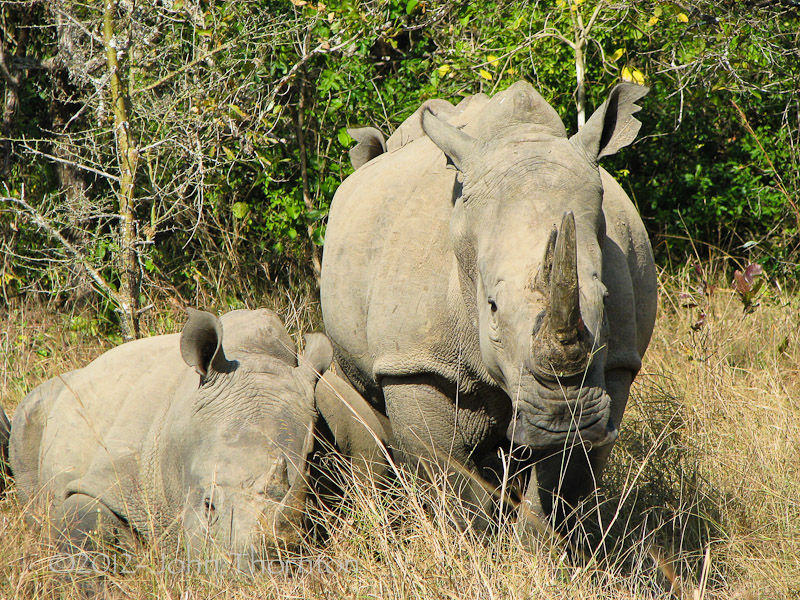 The Ziwa Rhino Sanctuary in Uganda is a Government-private partnership committed to restoring the wild rhino population of Uganda. Its 70 acres support six white rhino – four donated by Kenya in 2005 and two by Disney’s Animal Kingdom of Florida in 2006. Accommodation is available at the Sanctuary, which is also rich in other animal and bird species. All profits go towards the conservation programme.

There are only eight Rhino in Uganda, six of them are wild – we saw the lot! The other two are in Kampala Zoo. Approaching on foot, the rangers seemed totally unconcerned about how close we were getting, but I became very much less confident when the biggest male charged out of a thicket directly at us! Climbing trees was a hitherto unpractised skill in which, at that moment, I had no doubt I had Olympic potential. However, the rangers seemed to know some effective invective that caused the beast to pull up short – and when I say short, I mean about 10 feet away! A display of belligerence followed before an honour satisfied backing off – rhino, not us. I wasn’t very impressed by the pea-shooters that they seemed to consider to be guns for stopping this hurtling tank should their strategy have failed, and I slowly moved to place the ranger with the loud voice between me and it.

However, perhaps the oddest occurrence was stitching the wounds of the owner’s terrier after it had been attacked by a monkey! As for the elephant that got upset in Murchison, with not a ranger in sight – I’ve watched the TV and know that when they put up their ears they’re not happy – it wasn’t!

Postscript:
In January 2012, the birth of a female baby rhino brought the total number of wild rhino at Ziwa to eleven – 6 adults, 3 adolescents, a 2011 baby and the latest addition. The five young ones have all been born at Ziwa.